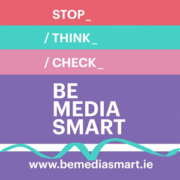 Campaign coordinated by Media Literacy Ireland, facilitated by the BAI,

to enhance Irish people’s understanding of, and engagement with media

A new public awareness campaign launched to coincide with European Media Literacy Week (18-22 March) has been unveiled which will encourage people of all ages to Stop, Think, and Check that information they see, read or hear across any media platform is reliable.

The ‘Be Media Smart’ campaign is designed to help people identify sources of information that may be unreliable, as well as deliberately false or misleading information.

It will enhance people’s understanding of, and engagement with media, while also empowering them with the skills to evaluate content across all platforms. Evidence supports the necessity for a media literate population:

The ‘Be Media Smart’ campaign comprises a dedicated website www.bemediasmart.ie, TV and radio ads, a social media campaign and a nationwide PR campaign. Campaign posters will also be on display in public libraries. The TV ad campaign will be launched by TG4 at half time in Croke Park during the All-Ireland Senior Club hurling and football finals on St Patrick’s Day.

‘Be Media Smart’ is an initiative of Media Literacy Ireland (MLI), a network of volunteer members working together to empower people to make informed media choices about the media content and services that they consume, create, and disseminate across all platforms. The campaign creative was developed by RTÉ’s corporate marketing division, which delivered a suite of radio promos, a TV ad and a range of social and digital assets to partners.

The MLI network is a unique collaboration between a variety of organisations, including media (broadcast, news publishers, digital organisations), online providers, libraries, academia, and the community and voluntary sector. The formation of the network was facilitated by the Broadcasting Authority of Ireland (BAI).

Speaking about the Be Media Smart campaign, Professor Brian O’Neill, TU Dublin and Chair of the MLI Steering Group, said:

“Media literacy – our capacity to access, have a critical understanding of, and interact with the media – has never been as important as it is today.  In a time when we are faced with a huge volume of information from a variety of sources, this campaign is a timely reminder of how important it is that people are aware of where their information comes from, and how to recognise information that might not be reliable. The Be Media Smart awareness campaign is built around bringing the same level of care to one’s information sources as one would of their food provenance or car history.”

“When the call went out to MLI members to support this campaign we were thrilled by the response – demonstrating the importance that MLI members place on helping people to Be Media Smart. We are very grateful to everyone involved in making this unique initiative a reality,” Professor O’ Neill continued.

GET DIRECTIONS
Marketing campaign worth €1.2m unveiled by Guaranteed Irish to celebrate Guaranteed...