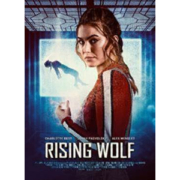 A dramatic new sci-fi thriller written and directed by Irish man Antaine Furlong is set to be released in Ireland and the UK next month. Rising Wolf, which is set in Shanghai, was filmed in Fox Studios in Australia and has been acquired by Samuel Goldwyn Film for US, Canada and rest of world distribution.

Featuring music by Academy Awards nominee and BAFTA winner David Hirschfelder, Rising Wolf has already had a successful opening in cinemas in Australia and New Zealand, will open across cinema and multiple platforms in the US on 6 August, and is due to open in Japan and across Europe on 9 August on iTunes, Amazon, Google Play, Sky, and Virgin.

Rising Wolf is a slick and deliberately disorientating thriller about a young environmentalist, Aria Wolf (Charlotte Best), who wakes up in an elevator in a high-rise building – with no recollection of how she got there! Trapped in a futuristic space and at the mercy of the villains responsible for her kidnapping, Aria knows she has to rely on her instinct to survive in a situation that is completely out of her control.

The film boasts an impressive ensemble cast of well-known names such as Charlotte Best (Home and Away and also Tidelands on Netflix), Jonny Pasvolsky (Rabbit, Mortdecai and McClouds Daughters), Alex Menglet (The Seagull), Susan Prior (Aftertaste and The Rover, for which she won an AACTA) and Tahlia Sturzaker (Netflix’s I Am Mother)

Rising Wolf is the brainchild of Wicklow man Antaine Furlong, who recently returned to his first love – film – after a stellar 20-year career in financing in the global entertainment industry. His interest in film goes back to his childhood in the small Wiclow village of Roundwood where his father used to run the local cinema out of their living room. From there, Furlong went on to do small jobs during summer holidays on various films like The Old Curiosity Shop with Peter Ustinov. He was also a production runner on Sweeney Todd with Ben Kingsley, directed by Academy Award Winner John Schlesinger as well as an assistant director, working with Mike Myers, on the Irish film Pete’s Meteor.

Rising Wolf is co-written with Kieron Holland and Sydney based Furlong says he is delighted that his dedicated team managed to successfully portray his unique and uncompromising vision to create a sci-fi psychological thriller – despite the challenges posed by the Covid-19 pandemic.

“Myself and Kieron wrote this story 12 years ago and we’re delighted that it has finally come to fruition. When Covid struck we hit a lot of hurdles, but we got back up and persevered. It was a Herculean feat by everyone to get the movie completed, but we did it. When I watch Rising Wolf now, it represents to me everyone’s unwavering love for making the film, their professionalism dedication, and need to create. This is what art is – creating something from nothing.”

To watch the official trailer of Rising Wolf, visit:

GET DIRECTIONS
Guaranteed Irish collaborates with “The Green Grocer’s Daughter” to unveil...