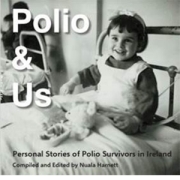 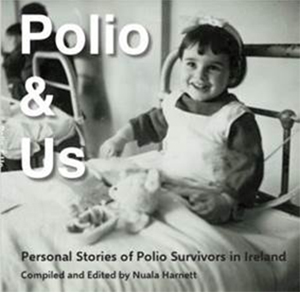 An updated edition of a book which shares 29 personal stories of polio survivors in Ireland and their ongoing struggles with the long-term effects of the disease has been unveiled by Polio Survivors Ireland.

Entitled Polio & Us, the book was originally published 15 years ago, but with significant renewed interest in pandemics, epidemics and disease eradication by vaccine due to Covid 19, the charity decided it was the perfect time to publish an updated version. The aim of the new publication is to help ensure that the legacy of polio is not forgotten and that eradication is protected.

Polio, or infantile paralysis, is a disease that struck fear into the hearts of parents across the world in the early 1950’s. The highly contagious disease could result in partial or complete paralysis for life. In an eerily similar parallel to Covid 19, the public were told to avoid large crowds, many events were cancelled while schools, circuses, cinemas and public baths were shut down, with much controversy at the time around what places should be closed, and for how long. Vaccination was introduced in Ireland in the late 1950s and while there is still no cure, the polio vaccine has resulted in the disease being largely eradicated across the world.

Polio & Us is essentially a time capsule of the stories of polio survivors and how they overcame the challenges of the disease. It was originally commissioned so that the trials and triumphs of those who contracted polio in the 20th century would not be forgotten. In addition, the story of polio in Ireland is one of a successful disease eradication that will resonate at a time of huge interest in vaccinations and viruses due to the Covid 19 pandemic.

Among those featured in the book are:

“I contracted polio on Friday, 13th November 1953, at the age of 17 months in my home town of Drogheda, and spent the first three weeks of the infection in the Dundalk Fever Hospital (as it was called then). Though supposed to be in isolation with no visitors allowed, my mother was permitted on one occasion to visit me.”

“I went to bed one night in April, 1938, and when I woke up the next morning my mother told my sister, Jenny, to dress me. Jenny could not do this, as I was neither able to sit or stand…After many tests it was discovered I had polio and was then moved to Cork Street Fever Hospital and isolated. My family were not allowed to come and see me; and, in order to keep me breathing, I had to use a ventilator.”

Jackie – born in Dublin in 1957 who features on the cover of the book:

“As a result of polio, I have a shorter, thinner and weaker right leg. Due to this weakness, my left leg has had an awful lot of extra work to do. However, now as a result of Post Polio Syndrome, it too has begun to be affected.”

“Many hospital stays and twenty-one operations later, I was able to walk – first without crutches, and then without callipers; and when I was seventeen was discharged out into the wide world with what everyone thought at the time was a stable level of disability.”

Polio Survivors Ireland was established nearly 30 years ago and is the only organisation in Ireland providing practical services and support to those unfortunate enough to have contracted polio as babies or young children. They provide a range of services including mobility aids and appliances, physiotherapy, occupational therapy and respite, and raise awareness of the issues faced by polio survivors. They also work to educate medical professionals, social care providers and health policy makers about the reality for all those still impacted by polio.

Polio Survivors Ireland has a network of support groups around the country and they also provide a telephone support service for those who can’t leave their home. As well as providing stair lifts, callipers, bespoke footwear, electric scooters and wheelchairs, the organisation also helps survivors to access a range of supports. For those who are isolated, a listening ear is often the most important lifeline the organisation provides.

“As we’ve seen with Covid 19, epidemics and pandemics are still a reality that can affect our everyday lives. However, the story of the polio epidemic in Ireland is one of hope, as the disease was successfully eradicated here by a vaccine. That said, the legacy of polio and the continuing struggles of polio survivors must not be forgotten and that is why we have reprinted Polio & Us.

Unfortunately, approximately 40% of polio survivors are now living with the late effects of this disease. Many have had years of rehabilitation to help regain independence, only to find their mobility impacted in later life once again by Post Polio Syndrome (PPS). This is why we continually work to raise awareness of polio.

Some survivors may not realise that there is help available to them and that’s why we are here. In addition, many health care professionals have not received adequate training to treat polio survivors. As a result, we work to address this by distributing essential information to GP’s and other healthcare professionals to ensure PPS is understood.”

Polio & Us is available to purchase here: www.polio.ie